Memphis is a resilient city that has seen many challenging times in American history. Whether it was the Great Depression, civil unrest or a recession, Memphis seemed to always come back better than ever. It may seem typical for anyone from Louisiana to compare New Orleans to Memphis, but there are some things in common between the two. It’s not so much that the two cities are obviously similar just for their food or music, but just like New Orleans, Memphis is incredibly individualistic and unique.

Though Memphis is the land that gave birth to rock-n-roll and soul, it never materialized as a permanent center for the music industry. As with music scenes in New Orleans and Austin, Texas, Memphis is too unique and creative for it to be run by men in suits. In turn, Memphis’ live music scene is in constant motion and closely connected. In recent years Memphis has produced alt-rock acts like Lucero and Star & Micey and pop icon Justin Timberlake.

Some of the best bars and venues that represent the rebellion rock-&-roll first started in the 1950s are hangouts in Midtown where it is said that Elvis Presley himself spent a lot of his off time on the down-low. One place specifically is Coletta’s where Presley enjoyed barbecue pork shoulder pizzas. The restaurant was the first in the city to start serving pizza, which was not popular in the South in the 1950s. To get Memphians hooked on pizza, Coletta’s invented the barbecue version that’s still a hit today. 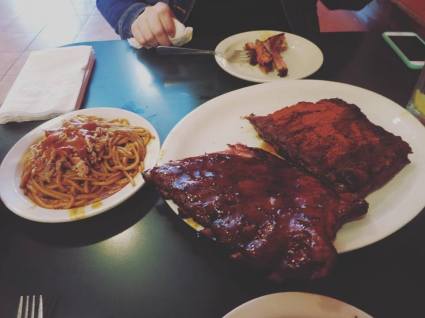 The Bar-B-Q Shop is in Memphis elite company for ribs and signature spaghetti. Photo By Jesse Brooks.

Memphis is known for barbecue, dry rub style to be specific, and although there’s no one answer when it comes to who is best, The Bar-B-Q Shop in Midtown is both a favorite with innovators and traditional purists. The best seller is the sampler plate featuring brisket, pork ribs, pulled pork, and barbecue spaghetti (their invention). The spaghetti may seem odd with pulled pork over noodles, but its “Italian-meets-BBQ” tomato and vinegar style sauce may remind some familiar with Tangipahoa Parish, of the sauce in Hi-Ho Sandwiches.

A favorite Midtown hangout for fans of good beer and bar food with no frills is The P&H Café. P&H is the kind of place where locals come for brews and burgers and late night entertainment. Their calendar is filled with events that have anything to do with comedy, music, and karaoke.

In downtown, traveling by public trolley offers the most affordable and scenic way to get around town. After enjoying views of the Mississippi River and Business District on the trolley ride, a popular stop on the route is in the South Main Arts District. It’s where Old Memphis meets new. A few blocks away from the National Civil Rights Museum sits Gus’ World Famous Fried Chicken on South Front Street. The small brick building may not be imposing on the outside, but inside the kitchen produces what is quite possibly the greatest fried chicken of all time. The reddish wet batter is a Creole-style that leaves the skin spicy and as light and airy as a crackling or potato chip.

Directly on South Main, more legendary food can be found at The Arcade Restaurant. Founded in 1919 by Greek immigrants, it’s Memphis’ oldest restaurant. Today, the Arcade serves up food diner style with breakfast during all operating hours. Aside from the delicious food, it’s nice just to sit and experience how those old days in the town must have made everyone feel.

The same feeling rings true across the street while enjoying a famous “Soul Burger” and beer at Ernestine & Hazel’s, a nationally recognized dive bar. The popular haunt is literally haunted as employees will gladly testify that they’ve experienced ghostly activity while on the clock. The bar has a long history that dates as far back as the 1930s and used to host a brothel upstairs- a possible contributor to restless spirits. Today the bar leaves the brothel rooms open for visitors to wander, explore, and encounter ghosts. The spot is original Memphis through-and-through and features a jukebox with soul hits.

In the heart of a downtown, every great city has a Times Square or Bourbon Street. In Memphis, Beale Street is that center. Stone’s throw from the Fed Ex Forum, where the Grizzlies of the NBA play, Beale is where the party can be found. For the sake of history and culture, everyone should experience the commercial appeal of the street and enjoy blues bands in the open clubs.

There’s something about experiencing Memphis and the towns south of it through Highway 51. It’s like putting together the pieces of a puzzle or linking units in a chain. Instead of hearing legends from locals about how Elvis or Jerry Lee Lewis used to stop in Amite or Hammond on the highway while commuting back-and-forth, it is a chance to create an original legend.

Find a route, map it out, go your own way, and make a legend.