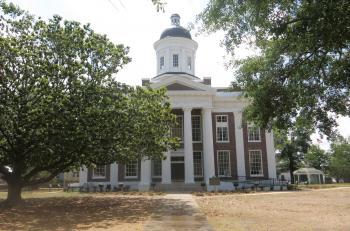 Like Amite, McComb, Brookhaven, or any town along Highway 51 and its parallel railroad line, Canton, Mississippi is a town that has some origins as a supplier for the Confederate Army in the Civil War. The town experienced a boom of growth as the railroad expanded business in the nation’s transition into the early 1900s.

Canton is the seat of Madison County and the courthouse, a Greek Revival-style building that was built in the direct center of town in 1855 and is still serving its original purpose today. The building is a symbol of Canton’s greatest period of development in a town where the visual atmosphere feels like the past is the living present.

When walking around in Canton amongst perfectly preserved buildings of the post-Civil War era and clean city streets, it is easy to get the impression of a movie set. Canton actually is home to several filming locations and a movie studio called Mississippi Film Studios. Notable movies filmed in Canton are: “Oh Brother Where Art Thou?,” “A Time to Kill,” and “My Dog Skip.”

One of Canton’s biggest draws for outside visitors is its vintage and antique markets. Since 1910, the Buttross Department Store has been family owned and operated inside of the Courthouse Square. Ever since the beginning, the store has fulfilled clothing needs for local families. The Emporium in the Square is a store where you can find a little of everything: from clothing to antiques and jewelry to home décor for those who like a classic American look. 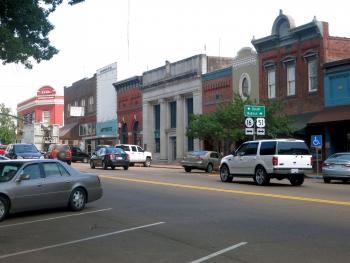 On the second Thursday in May and October, the nationally-famous Canton Flea Market is held. Since 1965, the market has served as a giant public event that features locally-made products by area artisans and craftsmen. Similar to Vintage Market Days in Amite, the event puts local and regional vendors in the spotlight and serves as a family-friendly event centered around food, music, antiques, and clothing.

Road travelers in Canton may find the charm of local franchise Bumpers Drive is the perfect answer to hunger, thirst, or a sweet tooth. Bumpers, with a location off the highway at 2761 Liberty St., offers up all the drive-in classics: burgers, chicken strips, slushes, and ice cream. Bumpers is an excellent throwback to the days of highway travel when drivers could find the right treat and enjoy service that comes to the car.

Canton is different than most Highway 51 towns in that there are no ghosts to chase because the past is living in plain sight. Visiting Canton is like visiting a theme park that doesn’t require an admission fee. The next time anyone is searching for the “good old days,” they should try Canton, where the good old days are today.