To experience the full range of Jackson, Mississippi’s food & drink culture, the best plan of action is to stay overnight so there’s amble time for the full experience. The Old Capitol Inn is a full service boutique hotel in the heart of downtown. The rooms are especially elegant and come at pretty affordable rates. Standard accommodation rooms cost about $99 per night, where suites and jacuzzi suites fall in the range of $145-175. The hotel also offers specials that include discounts for multiple nights or gift certificates for local restaurants. Wednesday through Saturday, the Rooftop Bar features local music and drinks. The restaurant also features a diverse menu for daily lunches.

For something authentically Jackson, there’s Big Apple Inn on Farish Street, owned and operated by Geno Lee, the great-grandson of a Mexican immigrant and son of an African-American freedom rider. The exchange of Mexican and African-American cultures around the Depression-era has resulted in tamales being as Mississippi as they are Mexican today. Since 1939, the restaurant has served tamales and the unique pig-ear sandwich. Pig-ear sandwiches are pig-ears boiled for hours dressed in slaw, spicy mustard, and served mini-burger style.

With more than three major sites for higher education, Jackson is a college town. For some reason, Irish pubs spring out of college towns. In Jackson, one particular establishment, Fenian’s Pub, stands out. Yes, there are burgers and fries here, but also delicious, traditional pub fare such as fish-and-chips and bangers-and-mash are found here. Pub fare must be paired with good beer and Fenian’s serves the local stuff like Lazy Magnolia and Yalobusha Brewing Company’s Larry Brown Ale.

PASSWORD- A rum old fashioned from The Apothecary at Brent’s Drugs, a speakeasy. Photo by Jesse Brooks.

For breakfast, there’s Brent’s Drugs in the hip Fondren District. The restaurant is a renovated 1950s drug store that features traditional diner breakfast with a new twist. The old milkshake bar is fully functional. At night, a secret speakeasy bar called The Apothecary operates in the back behind a curtain where the evening’s bartenders serve up original craft cocktails.
Also found in Fondren is the Pig & Pint, a barbecue restaurant featuring all of the great tastes in pork and the best craft beers from Mississippi to Memphis. The BBQ here is smoked and slow cooked to perfection and their award-winning Pepsi-cola glazed ribs are the centerpiece of their menu. The restaurant even flashes a little of a Southwest flare with their assortment of BBQ nachos and tacos. You can dine in or dine outside on the patio with a scenic view of the Fondren district. 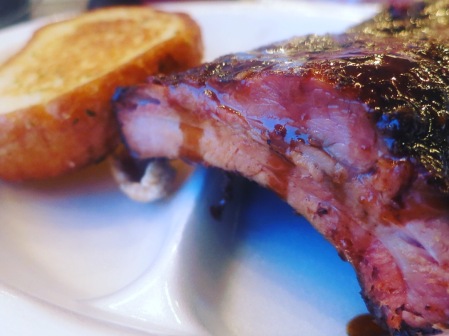 GLAZED PERFECTION- You don’t want to miss the best in Jackson BBQ from Pig & Pint. Photo by Jesse Brooks.

Most of Jackson’s food taverns double over as fantastic bars with excellent live music that is mostly based in blues or rock-&-roll. When hopping from one place to the next, it’s best to make sure that Martin’s Restaurant & Bar, Hal & Mal’s, and the Ole Tavern on George Street are on your list. These places serve as great burger-and-beer type restaurants in the earlier hours before they prepare for late night entertainment. Most nightly shows are rarely over $5 on average.

For late night blues, visit Frank Jones’ Corner, the last club of Farish Street. Shows have been known to last until 4 a.m.!

The best that Jackson has to offer can never be accomplished in a day. Highly underrated, the city is on its way to being a culinary and nightlife destination.