Our second side as we move north on Highway 51 will take us to the literary hub of Oxford, Mississippi. When the county seat of Lafayette County was founded in 1832, they chose to call it Oxford after the university city in England in hopes of promoting the new settlement as a center of learning. In 1841, the state legislature selected Oxford as the future site of the University of Mississippi, affectionately known as “Ole Miss.”

In the 1860s, the Civil War came to town. Out of Ole Miss’ entire student body, 135 out of 139 students enlisted with the Confederate army, and all lost their lives in battle. Most of the town was lost when Union Major General Andrew Jackson Smith ordered it burned. Most of what is seen today in Oxford’s town square was constructed in the Reconstruction Era. Federal Judge Robert Andrews Smith lobbied for federal funds that led to the construction of the now famous county courthouse in 1872 that rests in the middle of the town’s British-looking town square. This period also ushered in a movement of African-American freedmen who moved their families out of the country and into town to build houses, businesses, churches and schools.

James Meredith became the first African-American to attend Ole Miss in 1962, but the process wasn’t easy. His impending enrollment sparked a riot on campus that was supported by pro-segregationist Governor Ross Barnett. President John F. Kennedy put an end to the deadly riot that claimed the life of a French reporter and an Oxford repairman by sending in the National Guard. The Lyceum, the scene of the riot, is registered as a national landmark, and a statue in tribute to Meredith now resides on campus. 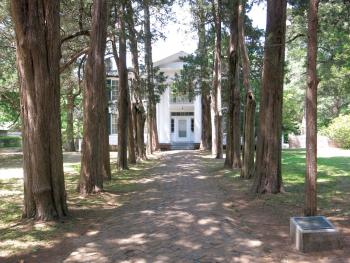 For years, Oxford has been a home to artists and writers that witnessed the struggle for economic freedom and civil liberty. The biggest giant of them all was William Faulkner. The Oxford native was influenced by modernist writers like James Joyce as a young man and began developing his style in the stream of consciousness mold. Always conflicted with the South’s social state, he moved to New Orleans in the 1920s where he would develop some of his earliest writing. After a brief screenwriting career in Hollywood, Faulkner returned to Oxford where he purchased Rowan Oak. The writer’s home is now a museum run by Ole Miss, and for a $5 daily admission fee, visitors get an insight of life inside his family home. His workroom is preserved with the storyboard of his novel “A Fable” still on the walls. The home is a two-story Greek Revival style house built in the 1840s. Faulkner’s home is essentially Southern. Though he seems to have held a conflicted relationship with his native land, as evident in his writing, it was a place he could never leave. It was both his frustration and his inspiration.

Oxford’s literary culture often finds itself at Square Books in the town’s square. Faulkner’s works, as well the works of the generations of Southern writers he influenced, can be found there. Square Books offers everything from today’s cutting-edge fiction to rare signed first editions of classics.

Open to the public, the library at Ole Miss offers interesting archives on history subjects unique to the South and Mississippi. Visitors are often most drawn to their Blues and modern political archives. Their Blues archives are one of the most comprehensive sources of information on the musical genre that often has roots that are hard to trace. Their political registry tells the history of Mississippi and the story of Civil Rights in the state.

Oxford and nearby Water Valley’s culture were also preserved by its blues heritage. Though mostly unknown in past decades, artists like R. L. Burnside and Junior Kimbrough were local legends of the area. In the 1990s, two editors from Living Blues Magazine founded Fat Possum Records. The label gave lost Mississippi bluesmen new life in a modern world. The label went on to produce records from crossover acts like The Black Keys and Iggy and The Stooges. In addition to local blues, Fat Possum now also produces young indie rock acts.

With great knowledge comes great culture, and that is what Oxford reflects today. Music, food, literature and more, are living and breathing rather than memories of the past. As we take a closer look next week, we will bring you everywhere you can find Oxford’s thriving culture.