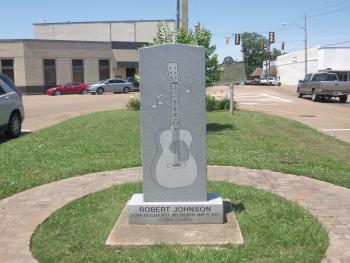 THE START- The City of Hazlehurst has a memorial in honor of bluesman Robert Johnson, who was born in the town about half an hour south of Jackson, MS. Photo by Jesse Brooks.

The stretch of highway spanning between Brookhaven and Jackson might be the most unassuming looking duration of Mississippi countryside before reaching the network of roadways the state’s capital city has to offer. There are trees and country roads for miles. The approaching neighborhoods are taking life one day at a time while it seems not much ever changes. Ask anyone on the street, and they might not know that the events that occurred in Hazlehurst and Crystal Springs, Mississippi, around the turn of the 20th century would change America forever.

Hazlehurst earned its name from railroad engineer Col. George C. Hazlehurst, who has another railroad town named for him in Georgia. Post-Civil War commerce along the train route served as the biggest period of growth for the city. By 1872, Hazlehurst’s growth eventually led to the city becoming the county seat of Copiah County, as it remains today.

Just as blues musicians like Bo Diddley in McComb and Little Brother Montgomery in Kentwood and later Brookhaven were mobilized by the railroad, the same effect was happening to the blues musicians of Hazlehurst and nearby Crystal Springs a little further north.

Though the blues routes in these towns were becoming common, there is one trait that separates them from the others: claims of the devil.

In African-American folklore around the turn of the 20th century there were claims in some rural areas that someone could meet the devil at a crossroads to gain anything they desired for a price: their soul.

Around the start of his career in 1914, an early blues guitarist named Tommy Johnson from Crystal Springs saw a marketing opportunity and started boasting that he had sold his soul to become a musical master. He often became “possessed” and put on a sinister persona, something very taboo amongst black and white audiences of the day. Johnson pushed the limits like an early version of a shock-rocker.

Years later a young African-American man born in Hazlehurst in 1911 named Robert Johnson would have the satanic myth attached to his name as well. However, unlike Tommy, the rumor was something Robert never asked for.

The details of Robert Johnson’s life are scarce, but he ended up becoming one of the most influential musicians of all time. Though largely unknown for decades, interest in his life and music rose after British rockers The Rolling Stones, Led Zeppelin, and Eric Clapton all cited him as an important influence as a songwriter and guitarist.

Johnson was born poor in Hazlehurst and the search for work had the family on the move. As a young boy he was sent to Memphis where he received some primary schooling in his youth. It is said that Johnson loved music at a young age but didn’t have much access to formal instruments. As a young man, Johnson eventually did enough farm work to buy himself a guitar. Some rural African-Americans in the late 1920s believed it was a sin to play secular music, and when his first wife Virginia Travis died in childbirth when he was 18, some said it was a divine punishment. Travis’ family blamed Johnson for her death.

A conflicted Johnson, at a “crossroads” of life, made a choice to leave town. He wanted to become a musician. He loved music and hated low-paying, back-breaking farm work. He began making the rounds in the delta trying to impress established artists like Son House, who said Johnson’s playing sounded like “chicken scratch.”

Dejected, but determined, Johnson returned to his birth town of Hazlehurst to look for his birth father, Noah, whom he had never known. While Johnson was in Hazlehurst, he met a man named Ike Zimmerman at a general store. Zimmerman offered Johnson guitar lessons and a roof over his head in exchange for hired help. For months the two practiced at night in the Beauregard Cemetery just south of Hazlehurst near Highway 51. Today the cemetery is still there and sits in an undisturbed neighborhood with no tourist markings. The location was confirmed in 2008 when Bruce Conford discovered a daughter of Zimmerman’s and documented their story in Living Blues Magazine.

Johnson’s nights in the graveyard made him a unique talent. He returned to the delta a more sophisticated songwriter and guitarist than most of his peers. His playing was cleaner than most in the delta, and his songwriting was full of thought-provoking metaphors as he reflected on his conflicting inner struggle of good-vs-evil. Perhaps bitter, Son House, to the day he died, could only claim that Johnson was as good as he was due to a deal with the devil. 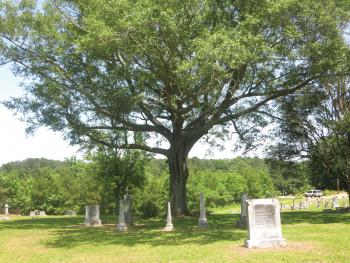 Johnson became a mythical legend. He had the type of fame that would have eventually pulled him out of rural poverty, but shortly before he was set to make his New York City debut at Carnegie Hall in 1938, he mysteriously died in Greenwood at age 27. Some accounts say it was a possible poisoning, and others claimed it was the final divine punishment for selling his soul.

Johnson’s legend inspired generations of music and he is credited as the “Godfather of Rock-&-Roll” for his complex music and mythical presence in history. The legend lives on through the Mississippi Music Museum, organized by the state’s leading music historian Dr. Jim Brewer, at Hazlehurst’s Amtrak station and the Robert Johnson Museum in Crystal Springs, run by his remaining heirs. The admission for both museums is free to the general public, and they start with Johnson as an inspiration. What’s left of Johnson’s birth home can be found behind the Copiah County Economic Development Center. There have been plans to renovate the home, but the city currently does not have the funds for the project.

ONE FOR THE ROAD- The Skeetburger Snack Shop just outside of Wesson is a little place with a big menu. Specials change daily and constant favorites are their big sized burgers and all meat potatoes. Photos by Jesse Brooks.

Hungry travelers on the way in can enjoy food near Johnson’s old haunts at a neighborhood joint called Skeetburger Snackshop. In a tiny wood building in between Wesson and Beauregard sits a beautiful place that offers up chicken, ribs, chili-cheese fries, but most importantly the skeetburger. The recommended double skeetburger with cheese features two types of cheeses between two juicy all-beef patties made on an old-school flat-top grill. Skeetburger is an amazing roadside stand like the kinds that used to cover miles of highway.

Close to home along the same highway sits the location of a magical place that launched so much of America’s music. It is important that we don’t let that connection go and make this highway our own as Johnson did.