EYE ON THE BALL- OFA Senior Mario Campo gets ready to take a swing. The Jackets scored over 40 runs in the Oak Forest Academy Sonic Classic on February 16-17. Photo by Matthew Roy.

Oak Forest Academy baseball opened up their season on February 16-17 by hosting the Sonic Classic, and the Yellow Jackets closed out the weekend with a dramatic win.

On Saturday, February 17, Centreville put together a rally to take a 12-11 lead in the top of seventh inning, erasing a previous 11-8 lead for OFA. In the bottom of the inning, Centreville walked two runners on base. Trevor Robinson hit a long ball that allowed Caleb Cleveland to come home and tie the game up at 12-12, leaving a runner on third.

Sensing a win, sophomore Carson Hoover came out swinging early in the count and hit a single that sent a runner home for the 13-12 win.

“We swung the bats well the whole weekend,” OFA Coach Tony Salim said. “We scored a lot of points. I think we scored close to 40 runs in four games.”

Against Centreville, the game was one of rallies. OFA faced an early 3-0 deficit in the top of the first, but it was as soon as the bottom of the inning they would take their first lead. Robinson got the Jackets on the board by hitting a long ball that would bring two runners home while he stayed on third. With the bases loaded, Robinson scored when the next batter was walked to take OFA’s first lead of the game with a score of 4-3. The Jackets increased their lead as much as 6-3 in the bottom of the first after freshman Cole Adams stole home.

The two teams were all even again going into the bottom of the fifth inning with an 8-8 score. Layne McLin went to base with runners on base and got a hit in the middle of the lineup to send Cleveland home for another scored run. McLine was next sent home by Robinson who again pulled off a big hit. Hoover’s hit would send Robinson home as OFA took an 11-8 lead mid-game. 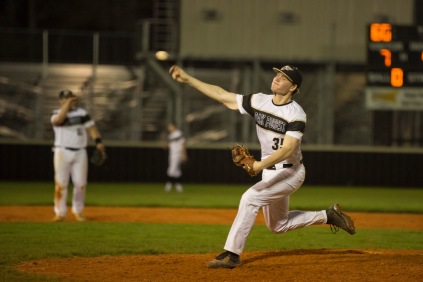 “Offense was obviously one of our strong suits over the weekend,” Salim said.
“We have a couple of guys that are out right but but once our pitching staff is at full strength I think we’re going to be really good and we have some high expectations this year.”

OFA went 2-2 over the weekend, beating Silliman Institute on Friday, February 16 with a final score of 13-9 and dropping a game against Central Private and another to Silliman.

OFA will enter the St. Stanislaus Tournament on Saturday, February 24 in Bay St. Louis, Mississippi and will host Copiah Academy on March 2.