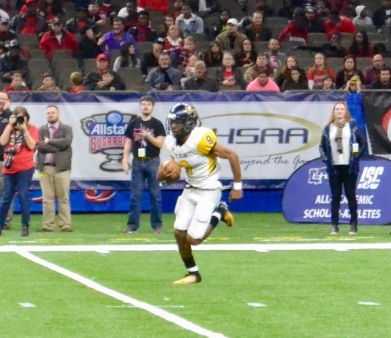 On Wednesday, February 7, St. Helena athlete Troy Hurst officially signed with the University of Memphis. Hurst stayed true to his original verbal commitment made to the program on August 23, 2017 despite recruitment from several SEC programs.

Hurst praised Memphis for their openness in their recruiting back in August and came away with an understanding that they would evaluate his position on the field after he officially started practices.

“I may end up playing both sides of the ball at safety, wide receiver and running back,” Hurst said back in August. “The environment and movement is lovely there. I feel I would fit into their system.”

Hurst was a Swiss Army knife for the St. Helena Hawks, coached by Brandon Brown, who used him in multiple positions on the field. At any given moment in any game Hurst seemed like he was the best linebacker, best secondary player, best receiver, best running back and even best quarterback between the two teams. Whenever his number was called, Hurst produced.

Hurst helped lead the Hawks to a District 9-2A Championship, and his team finished 13-3 overall, falling short to No. 1 Welsh in the LSHAA 2A State Championship.

Help support us at GoFundMe.