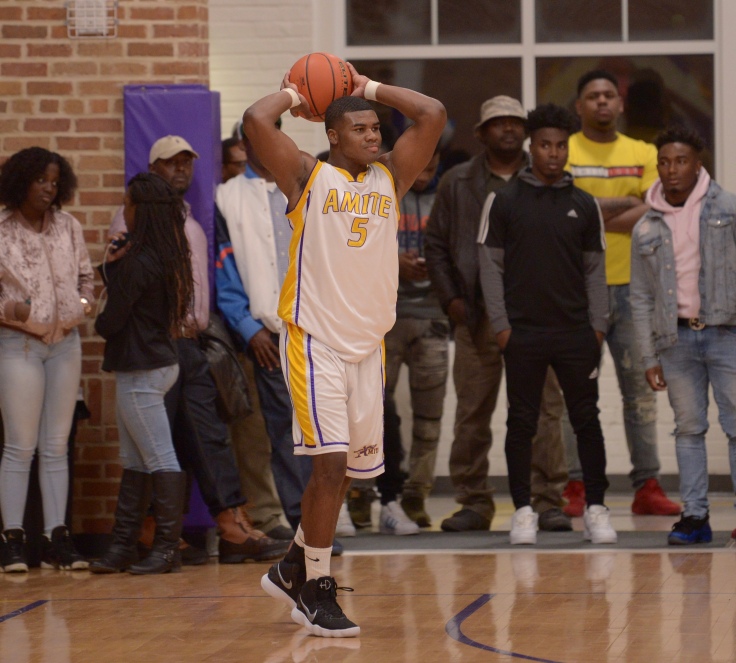 THE POWER- An aggressive Devonta Lee led the Amite boys to a 70-40 win over Independence with 21 points on Tuesday, January 30. Photo by Matthew Roy.

INDEPENDENCE- The Amite boys basketball team (13-10 overall, 6-1 district) avenged their last loss to Independence by putting together an aggressive defensive game plan that turned turnovers into points. In the end, the Warriors ran over the Tigers with a final score of 70-40 on Tuesday, January 30.

“The difference tonight was intensity,” Warriors Coach Ronald Cox said. “I want to give credit to Coach Gordon who took over the defense. When we play aggressive and discipled on defense, with our athletes, we can beat anybody.”

The Warriors jumped out to a 7-0 run by getting buckets in transition. Tiger guard DeAngelo Gaines stopped the early bleeding by getting his team’s first two points on a layup. Devonta Lee, who led the Warriors with 21 points, made his presence known by scoring on early touches inside of the paint. Melvin Baker, who finished with 11 points, tried to spark the Tigers with a 3-pointer inside of a minute of the first quarter, but Lee answered with two foul shots with :07.6 on the clock to give the Warriors a 16-9 edge going into the second period.

“Devonta Lee is our best player, and he’s more aggressive now,” Cox said. “He was our leading scorer tonight and when he plays like that we are much better.”

After Kelvin Barnes made good on a basket in the second period, Warrior center Tyrus Wheat threw down a monstrous dunk that inspired an 8-0 run for Amite. Baker stopped the run by making a 3-pointer, but the Tigers were still trailing 32-17 with 2:27 left in the first half.

Despite a second half dunk for Baker, and a 3-pointer for Jaden Howard, the Warriors did their part to widen the gap. Midway through the third quarter, Dereon Edwards sank a shot beyond-the-arc to put the Warriors up 53-34.

“They pressured us and rotated better,” Tiger Coach Ace Misita said. “We had a game plan in place. Everybody’s got a game plan until they get hit in the mouth. Amite hit us in the mouth and we didn’t respond.”

For a majority of the final quarter, the Warrior defense prevented any kind of offensive runs for the Tigers.

“You have no choice to move on from games like this. It’s like being a defensive back in football. You gave up a touchdown. Now, move on,” Misita said. “We have Pine tomorrow night and Pine on Friday. Those games determine if we get the No. 1 seed so let’s take care of business.”

Amite and Independence were competition for seeding in the upcoming District 9-2A Tournament. Now that the Tigers have fallen to Amite for their only district loss, they need to win out their remaining games to clinch the No. 1 seed.

In the LHSAA Class 2A Power rankings, Independence is listed at No. 9 and Amite comes in at No. 16.

On Wednesday, January 31, Independence defeated Pine on the road 68-32. Baker led all scorers with 24 points. The victory puts the Tigers at 16-3 overall and 6-1 in District.

The Tigers host Pine on Friday, February 2 and the Warriors will host Northlake Christian on the same date with a tipoff around 7 p.m.