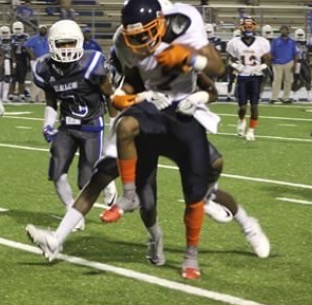 FAMILIAR FOE – The Kentwood Kangaroos will face West St. John on Thursday, Dec. 7 in the Mercedes-Benz Superdome in New Orleans for the LHSAA 1A State Championship. The Roos defeated the Rams in non-district matchups during the 2015 and 2016 regular seasons. File photo credit Jesse Brooks.

Last Friday the third seeded Kentwood Kangaroos took down Oak Grove 19-7 in the Semifinal round of the LHSAA 1A postseason to advance to state title for the second time in three seasons.
Similar to his older brother Shyheim in 2015, junior running back Larry Carter has been the Roos’ top option in the run game in this season’s march to the Superdome. Carter led the way last Friday with 126 rushing yards on 15 carries.
On the other side of the ball, the Roos continued their stout defensive presence by holding the talented playmaking abilities of Oak Grove’s Donald Gray, Kameron Holloway and Wyatt Rawls to a total of 132 yards of total offense. The Roos also shutout Oak Grove in the first half, going into intermission with a 13-0 lead.
The Roos first got on the board in dramatic fashion when quarterback Larenz Morris connected with Raddarius Robbins on a 34-yard touchdown pass with 5:15 left in the first quarter. Later, with 10 seconds remaining in the first half. Morris let it fly again to junior wide receiver Trey Palmer for a 45-yard touchdown reception.
The Roo defense held Oak Grove in check for most of the third quarter, and that allowed them to add a some cushion in the score as Carter capped off a drive with a 7-yard touchdown run with 1:19 before the start of the final period to result in a 19-0 score.
Oak Grove responded with their only score of the game on their next possession as quarterback Braden Sullivan found wide receiver Otis Moore in the end zone for a 5-yard catch. Going into the fourth, Kentwood led 19-7, which would also be the final score.
Early in the final quarter, Kentwood stripped the ball from Dalton Allen to turn possession over, allowing the Roos to shift into a ball control offense and eliminate time in regulation.
Morris finished his night completing 9-of-15 passes for a total of 175 yards in the air, plus two touchdowns. Morris was also the second leading rusher with 88 yards on 15 attempts.
Palmer led the Roos in receptions with two catches for 56 yards and one touchdown.
Kentwood has not lost a game since their week one 21-14 loss to Loranger in a non-district matchup. In 2015, the Roos were also a one loss club, with their only defeat being at the hands of Amite in a 34-22 loss.
Kentwood’s opponent, West St. John, is a program that should be somewhat familiar to the Roos. They earned back-to-back victories over the Rams in non-district matchups in 2015 and 2016. Last season, the Roos won on the road in week four with a 15-0 final score.
The Roos will take on the Rams for the Class 1A Championship in the Mercedes-Benz Superdome in New Orleans on Thursday, December 7 at noon.